As the sports retail, ecommerce and merchandise division of the Cube International group, Master Licensee of the Birmingham 2022 Commonwealth Games, we are delighted that the first Official B2022 Retail Store has been launched.

Perry, the official mascot of Birmingham 2022, was there to open the store and will be making special appearances at the store over the coming months. To mark the opening, the first 50 paying customers were lucky enough to receive 25% off their total bill.

Open seven days a week, the store will employ 25 people and overall more than 400 jobs will be created as part of the official merchandise programme. Where possible, staff will be recruited with the support of the Commonwealth Jobs and Skills Academy, launched by the West Midlands Combined Authority to generate job opportunities for and improve the skills of local people.

Midlands-based company, Cube International, was appointed earlier this year as the Master Licensee responsible for designing, sourcing, delivering and retailing official licensed products at all the official Birmingham 2022 retail stores they deliver.

Hammerson’s flagship destination transformed Birmingham city centre when it was developed and continues to be at the heart of the city’s social, cultural and arts programme.  Hammerson worked closely with Birmingham 2022 and the Master Licensee to support in the delivery of prime retail space in the heart of the city for the launch of the official merchandise programme.

Ian Reid, Chief Executive at Birmingham 2022 said: “We thought that this busy part of Birmingham city centre, with so many people passing through, was the ideal location to showcase our official Birmingham 2022 merchandise.

“With less than 250 days to go until the Games begin, we’re really excited to be opening the store in the heart of Birmingham. For many people, the store will be their first experience of Birmingham 2022, so this is a really momentous occasion for us. I’m encouraging all people, whether you’re from the West Midlands or a visitor to Birmingham, to show your support, get behind the Games and buy some official Birmingham 2022 merchandise!”

Alongside the Birmingham city centre Official Retail Store, around 40 official retail stores will be set up at a number of other city centre locations, transport hubs and Games venues in the run up to and during the Games.

Cllr Ian Ward, Leader of Birmingham City Council, said: “Buying some of the fantastic range of official Birmingham 2022 merchandise is a great way for people to show their support for the Proud Host City and the biggest event to ever be staged in our region.

“The new retail store is in a prime position in our city centre, giving the hundreds of thousands of people who come into Birmingham every day a convenient way to pick up souvenirs and items ranging from polo shirts to pin badges to Perry soft toys.

“I’m sure the store will be a well-received addition to our retail offer and I am delighted by the employment opportunities it will be offering for people in the city.”

Paul Blanchard, CEO at Team England, said: “We can’t wait to see fans in the crowds of packed stadia and venues wearing their Team England merchandise to support their home team, which will be so important to our athletes. For those competing for Team England in Birmingham 2022, the Games will be a truly special moment for them to perform in front of a home crowd. For many, it is a once in a lifetime opportunity. We’d love you all to get your Team England merchandise and show your support to the fantastic athletes who are working so hard in training to make the nation proud next summer.”

David Leather, CEO of CGF Partnerships, said: “As preparations for the Games continue, the first store will help to create an inspiring brand identity that gives the public the chance to own a part of the Commonwealth Games story and piece of history. We’re really excited to be involved in re-invigorating the Birmingham city centre retailing offer.”

Stephanie Lacey, General Manager of Bullring, said: “Bullring is a major landmark in Birmingham and a must for overseas visitors coming to the city.  It’s great to have the first Official Retail Store of the Birmingham 2022 Commonwealth Games located at the Bullring as the energy and excitement builds ahead of 2022.

We continually look for new ways to engage new and loyal customers and the new Commonwealth Games store not only complements but enhances our offering.”

The store will be open from 10am to 6pm Monday to Saturday and 11am to 5pm on Sundays. The store will also have extended Christmas opening hours. For more information, please visit Birmingham 2022 Commonwealth Games.

Official merchandise can also be bought online at the Official B2022 Online Store. 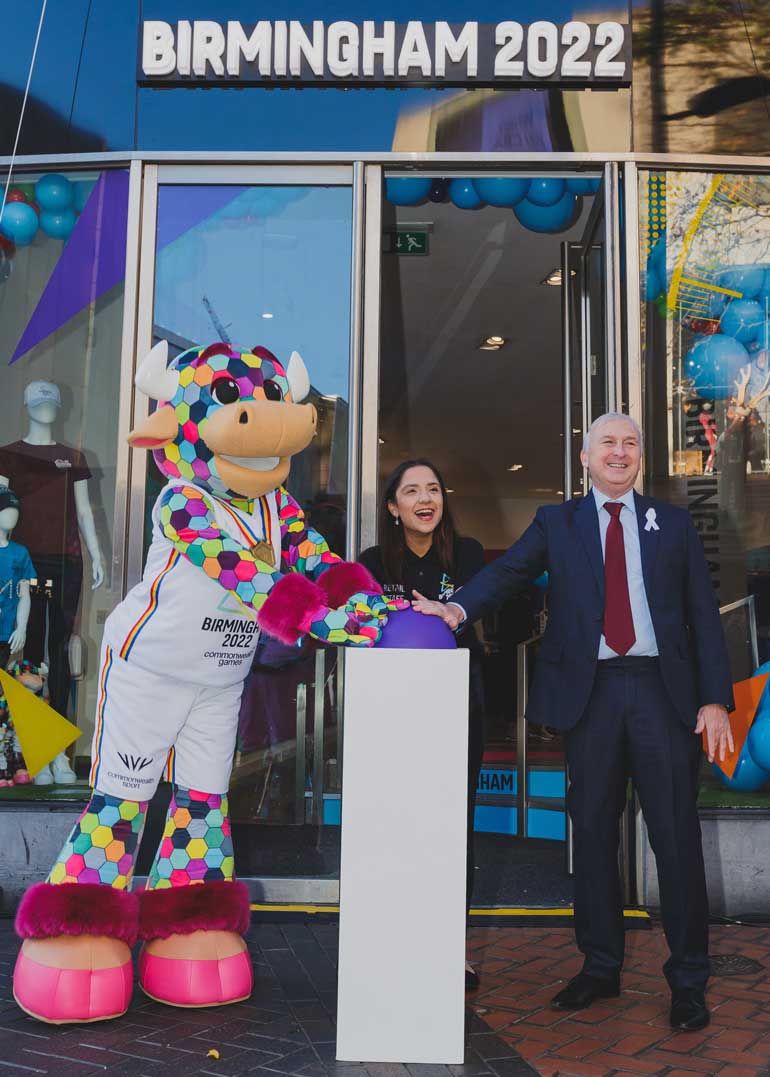 Part of the Cube International group, Cube Partnership is at the forefront of redefining and reimagining the sports retail, ecommerce, licensing and merchandise industries, working with sports brands, lifestyle brands, teams, venues and events across the globe.

This website uses cookies to improve your experience while you navigate through the website. Out of these cookies, the cookies that are categorized as necessary are stored on your browser as they are essential for the working of basic functionalities of the website. We also use third-party cookies that help us analyze and understand how you use this website. These cookies will be stored in your browser only with your consent. You also have the option to opt-out of these cookies. But opting out of some of these cookies may have an effect on your browsing experience.
Necessary Always Enabled
Necessary cookies are absolutely essential for the website to function properly. This category only includes cookies that ensures basic functionalities and security features of the website. These cookies do not store any personal information.
Non-necessary
Any cookies that may not be particularly necessary for the website to function and is used specifically to collect user personal data via analytics, ads, other embedded contents are termed as non-necessary cookies. It is mandatory to procure user consent prior to running these cookies on your website.
SAVE & ACCEPT